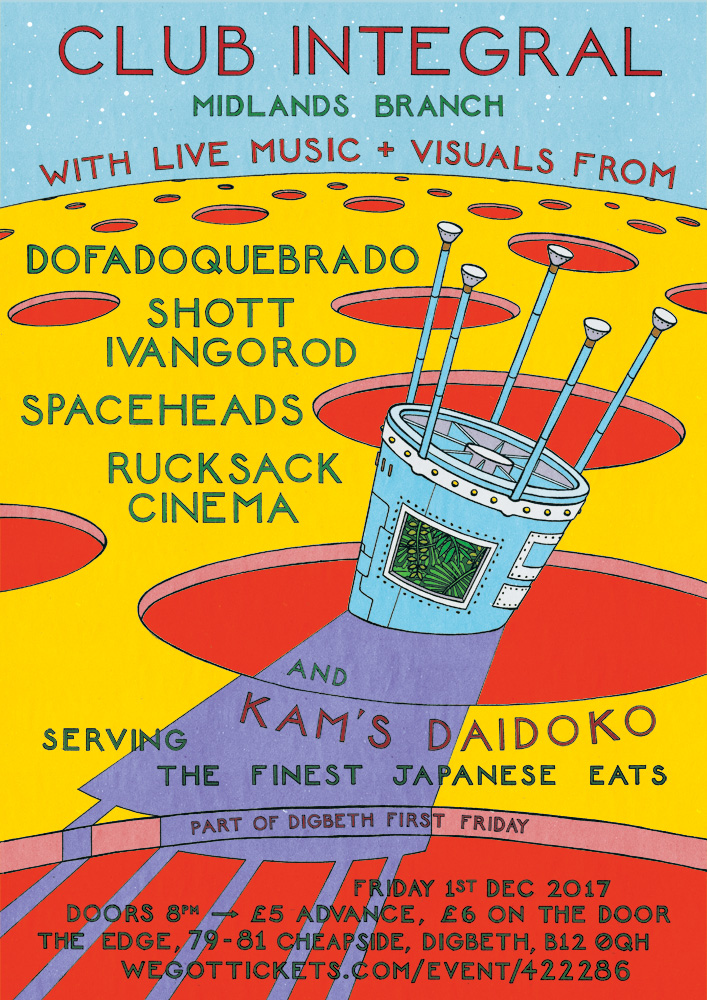 Come along to our final get-together of the year, as part of Digbeth First Friday, where Club Integral Midlands Branch, Dofadoquebrado, Shott Ivangorod (LARVA), Spaceheads and Rucksack Cinema promise an audio-visual spectacular! And for the first time at The Edge, Kamura of Kamura Obscura, who oft welcomes you at the door, will instead be serving very reasonably priced Japanese deliciousness from Kam’s Daidoko.

To the sounds and sights of our music and visuals extravaganza…

SPACEHEADS are a duo that graft the sound of technology – a hotwired horn producing harmonised loops and breathy samples – onto the ancient sound machines of trumpet and drums. Andy Diagram has been playing his trumpet through loopers and effects with various bands from the bright leftfield pop of Manchester’s indie heroes James, to the darker abstract sounds of Pere Ubu’s David Thomas. He has been taking the sound of the trumpet into the heart of alternative music. He has recently integrated a mobile phone into his set up attached to the trumpet with a fish slice as he transforms a single horn into the full sound of widescreen cinematic brass, right in front of your very eyes. He is accompanied by long-time musical partner Richard Harrison, whose unusual drum beats and percussive trickery utilzes tin cans, bottles, sheets of metal and most bizarrely, a pair of squeaky toy pigs! Between them, the duo generate a fusion of jazz, funk, dance, electro and indie to create an inimitable sound of their own. This unique sound has been crafted and honed over 27 years and the listener is taken on a magical rollercoaster ride of twists and turns through multiple rhythmic and melodic journeys. Their show here follows hot on the heels of the release of their new 13-track, 13th album, A New World In Our Hearts, which features tracks inspired by peoples struggle for a better world. Live favourites from the album, The Revolution Sashays Up The Mall, Fanfare For The Exiles and Laugh In The Face of Power, are currently being championed on Gideon Coe and Stuart Maconie’s BBC 6 Music shows.

But the Spaceheads experience isn’t just an aural treat – they are accompanied by RUCKSACK CINEMA, whose live mixing of video images, from black and white films of steam trains, 1920s space films and clips from classic movies combines with images of the universe, spinning stars, psychedelic swirls and blocks of light and colour projected around the walls, floor and ceiling of the venues they play, turns the whole show into a complete mind blowing audio-visual experience not to be missed.

http://spaceheads.co.uk/
https://twitter.com/SpaceheadsMusic
https://youtu.be/JhnMCpBTPTI
https://youtu.be/3-qrZiBa63MDOFADOQUEBRADO is a duo by Ricardo Santos Rocha and Sam Frankie Fox that develops original compositions based on old and contemporary Portuguese poetry, including arrangements of the works of Camões, José Saramago, Fernando Pessoa, amongst others.

For this solo mission, SHOTT IVANGOROD of LARVA (Ondes Positives Recordings) has created a new electronic score for a very unusual cult movie: THE ARRIVAL (1979) – an educational film created by the UNARIUS society (Universal Articulate Interdimensional Understanding of Science), a science/theosophy-based flying saucer cult from the US founded in 1954 and who still have branches worldwide today. By the late 70’s UNARIUS had built their own film studio and produced a number of extraordinary movies as part of their outreach, spreading their message of peace, reincarnation and cosmic clairvoyance. The film is a genuinely joyous one-of-a-kind, with production scope and special effects on a par with the big studio science fiction of it’s time, and stands alongside Sun Ra: Space is the Place as a masterpiece of way-out space cinema.

Using mainly a vintage 80’s Russian AELITA synthesizer (along with primitive effects, drum machine, guitar and a few other bits) Scott has gifted THE ARRIVAL with the primitive Kosmische/psychedelic soundtrack which it has always deserved. For the finale he’ll be joined by Carmen Vaughn of Horse Feathers on vocals.